One way to identify high quality companies is to look at their return on investment. Companies that can turn invested dollars into profits will likely see an increase in earnings per share, which can drive stock prices higher.

At the same time, the weighted average of the company’s cost of capital must also be taken into account. Firms with lower WACC show that the costs of investing in the firm’s operations do not outweigh the gains made through return on investment. Companies whose ROIC is higher than WACC mean that they are creating value.

For example, if a company has a ROIC of 20% and a WACC of 10%, it has produced 10 cents of value for every dollar invested in the company.

We will be looking at three companies with an ROIC of at least 16%, a WACC below 5%, offering an above-market dividend yield and are considered to be trading close to intrinsic value.

The first name to consider is Altria Group Inc. (MO, Financial), a major tobacco manufacturer. The company sells its brands, including Marlboro, Skoal and Copenhagen, across the United States. Altria is valued at $93 billion and generates annual revenue of nearly $21 billion.

Altria has a five-year median ROIC of 16.1% and a WACC of 4.8%, meaning the company generates more than 11 cents of value for every dollar invested in the business. This is the best performance among companies in the tobacco industry.

Given the company’s success in strategically investing in its business, it’s no wonder Altria’s earnings per share are growing at a compound annual growth rate of 11.5% for the 2011-2020 period. This is the best performance among companies meeting the criteria in the tobacco sector.

Turning investment dollars into profits has helped Altria increase its dividend for 52 consecutive years, making the company one of 35 Dividend Kings in the market. The dividend has a compound annual growth rate of 8.4% over the past decade.

The stock is yielding 7.1%, more than five times the average return of the S&P 500 Index. Altria has long been a high-yielding stock, but the current return is above the 10-year average of 5.4% .

Altria is trading at just over 11 times earnings estimates for 2021. That’s well below the 10-year average price-to-earnings ratio of 16.4.

The GF value line shows that the stock is trading close to its intrinsic value.

Altria closed Friday’s trading session at $50.81. The stock has a GF value of $48.53, giving it a GF price-to-value ratio of 1.05. Altria is considered quite popular by GuruFocus.

Next up is Amgen Inc. (AMGN, Financial), a leading biotechnology company. The company offers products that address a variety of therapeutic areas, including oncology, cardiovascular disease and inflammation. The $133 billion company has annual revenue of more than $25 billion.

Amgen’s median five-year return on investment is 20.9%, while the WACC is 4.8%. As a result, Amgen created more than 16 cents of value per dollar invested during this period. There aren’t too many healthcare companies with better value creation.

That’s why the company’s earnings per share has a CAGR of 13.6% over the past decade. Share buybacks helped results during this period, as Amgen retired an average of 3.5% of the number of shares per year. Yet net profit has grown nearly 6% per year since 2011.

Long-term growth has allowed Amgen to increase its dividend over the past 11 years. Dividend growth has been aggressive at over 19% per year for the past 10 years. The pace of increase has slowed over the past five years, but has remained quite strong at 11%. The company’s shares are yielding 3.3%, 100 basis points better than the stock’s 10-year average return of 2.3%.

The stock trades at 14 times earnings estimates for the year, slightly ahead of the long-term average price-earnings ratio of 13.4.

On the other hand, the GF value line shows that the stock is trading below its intrinsic value. 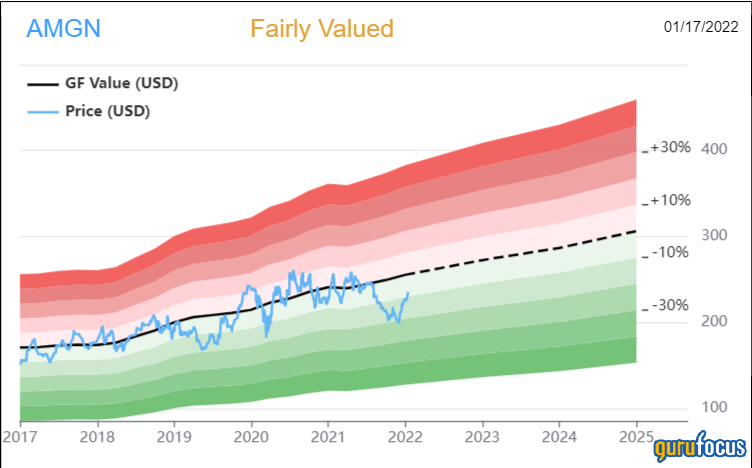 With a recent price of $235.36 and a GF-value of $256.24, Amgen has a price-GF of 0.92. The stock is valued at fair value, but would offer a 9% yield if trading at its GF value. Add the dividend and total returns could stretch into the low double-digit range.

The third name on this list is McDonald’s Corp. (MCD, Financial), which is a leading foodservice retailer. The company has nearly 40,000 sites worldwide. McDonald’s is valued at $193 billion and generates revenue of $19 billion a year.

McDonald’s median return on investment over the past half-decade is 18.3%. The company has a WACC of 5%, which translates to more than 13 cents of value creation for every dollar invested in the company. Of the names in the restaurant industry, only Domino’s Pizza Inc. (DPZ, Financial) has a better value creation metric.

The company’s earnings per share has a CAGR of just 1.5% over the past decade. This is due, in large part, to performance during the worst of the Covid-19 pandemic. For the decade to 2020, the earnings growth rate was 6.1%.

The company is rapidly approaching five decades of dividend growth. After a 7% increase at the end of 2021, McDonald’s dividend growth streak stands at 46 years. The most recent increase is the CAGR of the dividend over the past decade. McDonald’s is returning 2.1%, which is below the stock’s long-term average of 2.9%, but better than what the stock index is returning.

McDonald’s is trading at more than 27 times estimates for 2021, a premium from the historical average of 21.3 over the past decade. 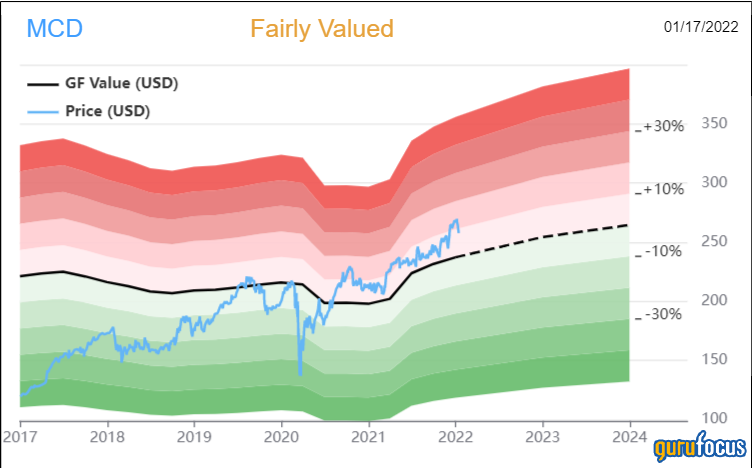 Using ROIC and WACC can help an investor determine which companies are best able to turn invested dollars into value creation. These companies tend to see their profits increase over time. Altria, Amgen and McDonald’s are three very highly valued names.

Each name also offers a generous dividend and at least a decade of dividend growth. Altria and McDonald’s, in particular, have a very long tradition of increasing dividends. All three stocks are considered fairly priced as they trade close to their intrinsic values.

For investors looking for value-creating companies, Altria, Amgen and McDonald’s are three names to consider.